Confession: It’s mid-December, and I haven’t yet written my 2018 (!) writing goals. At the end of last year, I sat down with a cup of coffee & wrote a list of everything I wanted to complete that year. It was a very ambitious list. I didn’t expect to complete even half of the list, and as it took me six months to (heavily) revise MIDNIGHT QUEEN, I sort of thought: “Well, I can’t finish everything on my list…but I’ll try.” 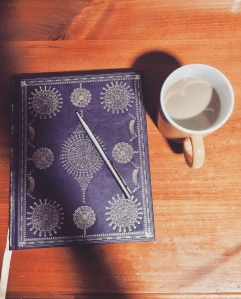 I’ve mentioned this before, but I set aside most of this year for reworking projects that I was still super-passionate about (…which was just about all of them, as I figured out.) So when I did sit down to draft my NaNoWriMo novel last month, it was a strange (and very difficult) feeling to write something new from scratch. But, like they say: You can’t edit a blank page.

So. Here I am, halfway through December, and I’ve finished everything on my List.

This took me much, much longer than I expected. And by the time I finished (around June) I didn’t think I’d complete the rest of my list. I’m not quite sure why it took me so long to get this revision done. I think, in part, because this story means so much to me, I was terrified I’d get it wrong. Writing about your own culture/mythology is always a little bit daunting. But once I shed that fear, once I told myself I could edit, tweak, and change later, it became much, much easier.

I think I first drafted this book when I was fifteen. Since then, it’s been revised multiple times…and I’m finally, FINALLY beginning to get to the story I always intended it to be right.  It’s STILL not there, and I know that I’ve got a lot of work ahead of me, but I finally feel like I’m heading in the right direction.

ICYMI, I shared a tinyyyyyyy teaser from the book a few months back, though there’s a chance that’ll change during revisions.

After getting some notes back from a crit. partner, I went through and revised my YA space opera again, and I fell even more in love with my arrogant, egotistical thief & con-artist (…umm, this is normal, right?), and the bloodthirsty galaxy she lives in. This is SUCH a fun project to work on, and I love my protagonist’s emotional development throughout the novel.

(Speaking of space operas, I am SO excited for The Last Jedi… Everything I keep hearing about it sounds incredible. I’m off to see this soon, actually.)

This was my NaNoWriMo novel (which I finished just recently!) I won’t go into too much detail about this novel because a) it SUCKS, and b) I’m still figuring out the plot. But I will say that it was a blast to write!

This is the book I’m totally pitching as Norse mythology + Game of Thrones. Basically…I love this book. My protagonist tames wyverns for a living, who gets caught up in a rebellion against the witch-queen… So yes, she’s pretty badass! I revised this book just before NaNoWriMo (…I literally finished this WIP the day before NaNo began!) and diving into the next round of self-edits soooooon, before I hand it over to critique partners.

So—I’ve had a pretty successful 2017 with writing… but what do I want to accomplish next year? Like I mentioned, I haven’t yet thought about/written my 2018 writing goals, but here are some more personal goals I’ll be reaching for next year.

So… those are my goals for next year! How about you? What—no matter how small—have you accomplished this year & are proud of? What resolutions do you intend to keep for next year?

Currently listening to: “The Return of the King” Original Score by Howard Shore